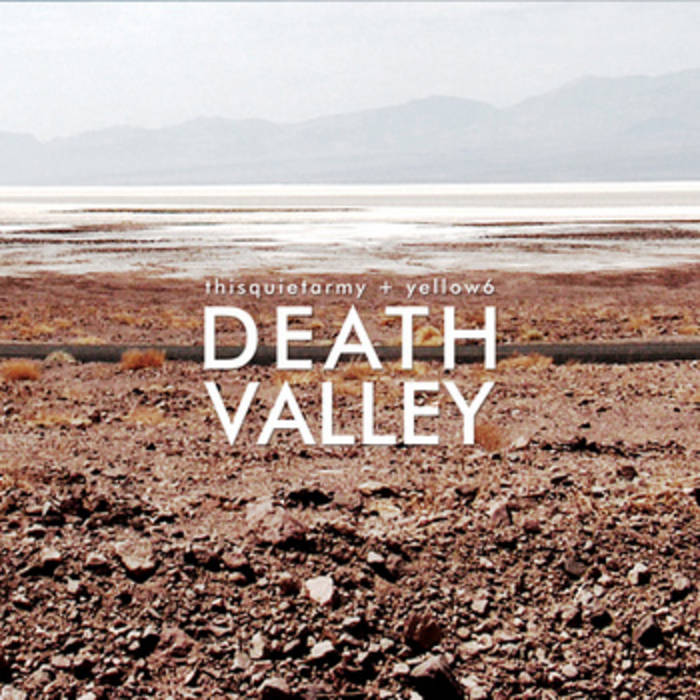 DEATH is the first of two installment of the collaborative effort between thisquietarmy (Canada) & Yellow6 (UK), two of the most innovative guitarists in the current ambient scene.

Eric (thisquietarmy) & Jon (Yellow6) met on the evening of March 13th 2009, in Montreal, as they were both scheduled to be part of the 6th annual Under The Snow Festival curated by Jean-François Rioux, founder of emoRAGEI Magazine & Where Are My Records. The circumstances of their recording session mostly revolved around the spontaneity of their get-together, the cold & snowy Canadian winter weather and their exhaustion from lack of sleep, both having played shows the night before, Jon also had just landed in town late afternoon from gigs in the USA. Nonetheless, merely an hour after they’ve met and a quick tour of the city sights, Eric & Jon were already set up to play and record at TQA HQ, Eric’s living quarters. Without any discussion prior to recording and fuelled by their respective state of exhaustion, the two guitarists would simply wing it out and feed off each other’s sound semi-consciously for two straight hours while the computer picked up the separate tracks from the tone of their instrument & array of pedals.

“VALLEY” is the 2nd part of this lonely journey across the desert. While the last track of “DEATH” left us wretched and drained on the ground, “Dunes”, the first track of “VALLEY”, picks up with a slow awakening from this state of comatose. The blood rushes through the brain, pounding rhythmically through the temples. Numb and semi-conscious under the scorching sun, in the middle of the burning sand and surrounded by rocks, infinity is on the horizon, throughout its range and beauty. Revived and back on your feet with “Creek”, the journey continues but the resumed path still seems endless and scary, bringing back fear and doubt. Death is still lingering, always. “Flats” is the light at the end of the tunnel. Exhausted, hope appears out of nowhere as an exit path miraculously welcomes you. One last effort to power-through the last distance, looking straight ahead with confidence, leaving this desert behind while the Other puts a definitive end to this hell, at last. Safe but marked for life.